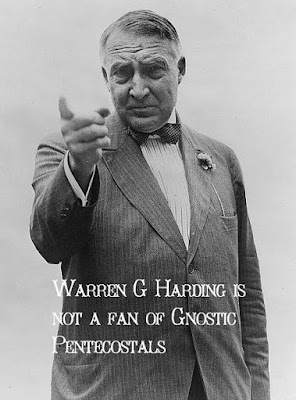 There are two things I giggle at these days. This will be one of those:

A kind of gnostic Pentecostalism that forfeits itself and the Christian duty to reconcile the world and serve. By gnostic I simply mean a kind a Pentecostal who believes in a "secret kind of wisdom" that is revealed to them by God that is distinct from that which may be discerned by the Word of God (e.g. "God has revealed to my that Spirit X is attacking us and holding us back from revival.").

We all know it is Christ hanging dead from a tree that saves us. However, for the gnostic Pentecostal, they would be much more comfortable with Christ's sacrifice being done in intense prayer in the Garden of Gethsemane (though that scene is remarkably moving). Christ however did not bring salvation by praying for a revival vis-a-vis breaking spiritual strongholds in the mystical "spiritual realm" that sets up a kind of Christian dualism. Instead Christ brought salvation and restoration by allowing us and our sins to kill him. We killed God and only in that innocent body of the dead God-Man  can we find the awe-inspiring love that he intended for us. Yet these Gnostic Pentecostals for reasons that I find comedic, cannot grasp that Christianity is absolutely about action in the here and now. Instead they find strength in prayer and talking to God and also sometimes deluding themselves into thinking there is some authority in uncut hair other than simple obedience, if they interpret I Corinthians 11:1-16 as a universal command.

To confront Satan as the problem of why our church is not growing is much easier than to actually try engaging with a culture and world that is foreign to us.

In other words, Gnostic Pentecostals live their Christianity in prayer acting like that does anything to saving the world instead of actually taking action in saving the world. It is not that praying does nothing, but along the lines of Kierkegaard, prayer doesn't change God, but rather prayer should change the one who is praying. Thus in terms of saving the world, talking with someone about God or helping someone out with a chore around their house will be much more productive in terms of redemption than simply praying for them (of course prayer is a good supplement).

The reality though, for such Gnostic Pentecostals, they preach much,  pray more, tell themselves about themselves about having the full truth (which apparently resides in a "spiritual realm") and follow a strict moral code based in Biblical obedience. They do all this so they can excuse themselves from doing anything of actually acting out a love for their neighbor (other than hosting a promotion Sunday on their very church grounds).

Thus such a brand of Pentecostalism (though this is certainly the exception amongst our populous) talks much to God and to themselves so they don't have to do anything. Love for your neighbor for them is done in prayer for them and sending warm Christmas cards or a text message saying "I have been thinking about you...Love you."

I'll take Jesus and a sacrifice that isn't defined by simply dealing with love by way of a prayer and complaining about split-ends...
Posted by Joel Riley at 9:46 AM 10 comments:

#226-Putting Dead Birds in Your Hair 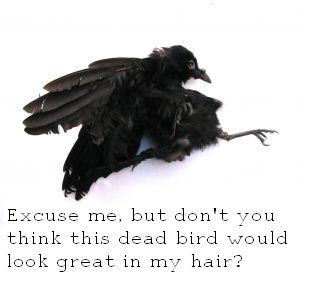 
I have notebooks full of posts for this blog right now...e-mails to myself for posts, post-it notes about posts, posts about posts in the draft form in this blog.... Needless to say I have some stuff unleash. But it ain't gonna be pretty...


Things I have written about in these "top secret" posts:

And it's that last bullet point that most of my secret posts are about. Except I kind of rail against those who I have in the past allied myself with. I wouldn't say it's me going conservative. I would say it's me going more philosophical and finding some of the liberal position empty (not that the conservative position is by any means more fulfilling but my previous writings on this blog regarding these shortcomings speak for themselves). So i guess I am explaining my silence from this blog not just on business but also because of hesitation of me getting misinterpreted in the process of my liberal polemic. So as I write the following "SAL-Like" post which isn't concerned with theology, i also want to say, be forewarned that you who once loved me, may end up hating me, and i would ask you to enter into conversation with me in the comment section if you disagree in coming weeks. Also the gnostic pentecostal post will be up Wednesday evening. And then my first "anti-liberal" post will be up Friday.
Now back to dead birds:
(you so need this song right about now, i mean look at the lyrics: Almost cut my hair, it happened just the other day. It's getting' kinda long, I coulda said it wasn't in my way. But I didn't and I wonder why, I feel like letting my freak flag fly.)
The Mystery and my assumptions
There is a great mystery to me amongst the female Apostolic gender (well there are many such mysteries, but this post aims at one of the most confounding mysteries of the Apostolic female)....
It regards their hair.
I would imagine the tendency for an Apostolic female's hair to "conceal" the surprising length of their hair...I'm not saying it's right or wrong, but in terms of self-consciousness, I can imagine the internal agony some females of our movement may feel when out amongst our society and noticing the less-intrusive hairstyles of their secular peers because they cut their hair...
Along this same thought you hear of a girl chopping her hair so it will fall off with wooden blocks, but yet she can innocently say she hasn't cut her hair. More popularly one hears of females in our movement perming their hair as if to "fry" the hair off. Now the ethics of this "short-cut" i care not to discuss here, but the point is such attempts at shortening hair would be more along the line at what i would imagine females in our movement would be tempted to do in their flesh.
The Mystery of Drawing Attention to your Hair
However, there are more popular trends (and this is where the mystery comes in) in our movement wherein the female does the opposite of what I would assume the case: The apostolic female brings attention to her hair and thus makes a visual cacophony of her hair as if on her head rested the Queen of England herself and thus the female wanted the whole world to know that such Royal persons rested within her hair. They decorate their hair sometimes with poofs that could house a homeless community or they add a headband bigger and shinier than a Hollywood premier...there is obviously the equally vulgar idea to stick a huge flower in your hair so that if worse comes to worse, a bee will try eating pollen out of your head. In the late 90's, it was hair-sticks, and I'm told that in the 70's some Apostolic Females placed entire oatmeal boxes in their hair (not joking).
But the idea that has appalled me the most of recent trending in regards to Apostolic females and hair is the title of this post: Putting dead birds (or what appear to be dead birds) in your hair- 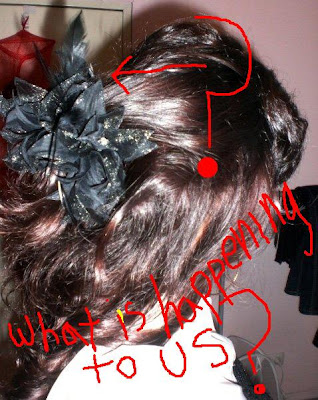 Now the tendency may be to shout that this trend should be considered ornamentation or the 21st century version of braiding your hair with gold (a-la I Timothy 2:9), but i say nay. I say that what we are seeing here is modesty in it's most sincerely humbling form:
What can be a better display of humility than volunteering to let your hair showcase the remnants of a bird's corpse? There is a reason most of these dead bird hair-pieces are black and thus more akin to a raven than they are white: because they symbolize death and decay.
In summary then, is not the "dead hair piece" trend that is so popular these days at conventions and Bible colleges, not a living testament to the APostolics taking on the suffering and confusion of their world and wearing it on their heads as if to sympathize with such suffering?
Although I can understand the opposite point of view: Taking anything that is smaller than a tree shrub and putting it in your hair. At which point the "dead-bird hair trend" is just simply a very bad joke on all volunteering Apostolic females who wear the garments that look like dead birds thinking it is fashionable. But seriously, who does that?
Posted by Joel Riley at 6:50 PM 15 comments: